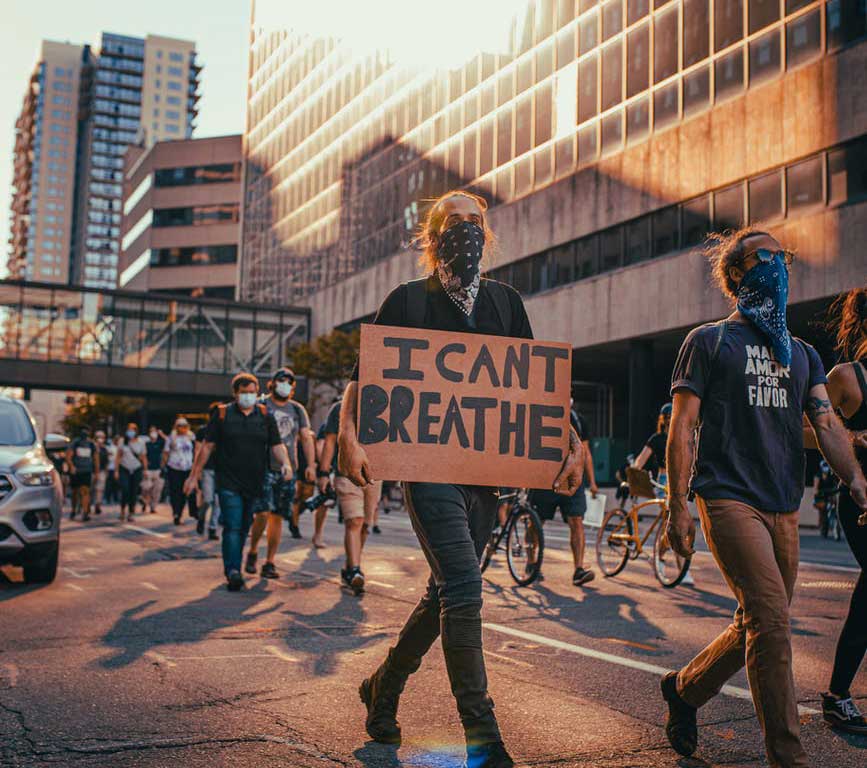 George Floyd– Since the beginning of times, human beings have strongly pursued happiness. The notion of it still remains relative according to the race, gender, culture and even origins.

In some parts of Africa, having three meals a day is a huge sign of success therefore even a car could totally be excessive.

Did anyone of us forget the part of the declaration of independence of the fourth of July of 1776, so eloquently repeated by Martin Luther King Jr and in which it is clearly said:

“We hold these truths to be self-evident, that all men are created equal and that they are endowed by their Creator with certain unalienable rights, that among these are life, liberty and the pursuit of happiness”?

All I can see right now in America is that if happiness could be defined as a durable and balanced sense of well-being created by the satisfaction of our desires and aspirations, the road that leads to it is completely sprinkled with thorns of all kinds for African Americans of all backgrounds.

While the philosophical conception of happiness would undermine this view and be more realistic about it, some implore peace as the major ingredient of happiness, the others call for justice, and the rest want both.

While the whole world cries the death of George Floyd, the web and newspapers spill their minds and send multiple messages of support and condolences for some and support to the police for others.

This tragedy (George Floyd death) has taken a turn and dimension never expected by any member of the house, senate or white house, yet, it is visible that the feeling of regrets fill the hearts of both parties.

While many feel like this is the straw that broke the camel’s back, other thinkers go even deeper into the very historical relationship that have shared the parties over the centuries, and try to understand where it all went wrong.

What would the forefathers say if they woke up right now from the dead? So many versions and so many stories, yet one thing is for sure, there is nothing on earth that was been built without peace.

The rift separating the two parties has been of long, and maybe it is time to mend their hearts, turn the page of a heavy, disgraceful, humiliating, and difficult yet strengthening, enriching and heavily cultural past, that hasn’t stopped hindering the future of the African Americans as some of the white Americans have a sense of historic privilege.

Black Africans, as we call them in Africa to specify the brothers who have been taken from us through slavery all over the world, North and South America, the Arabic peninsula, Northern Africa, have shown a resilience beyond understanding, yet the ones of the US have been able to breakthrough with a bigger, more united and more significant fight corroborated by the millions of white people who joined their cause, rallying, screaming, hunger striking, organizing, being whipped and jailed.

The civil rights movements were amazing but nothing comparing to this greater coalition that is rising and growing by the day before our very eyes. And as it grows, it melts down the feeling of impunity and entitlement long felt by some minorities who caused the most damages.

It is simply unfortunate that bad things echo much louder than good things, it is one of the things that makes life sometimes ingrate. If they did not make it during the cessation war it is now that they will.

Though justice must unequivocally, mandatorily and impartially be served, we all are from thereon responsible to make life go on as peacefully as possible.

Life has durably taught everyone throughout various historical and actual situations that none can force another to do anything, but earn the respect and force admiration.

Everybody knows that there would have never been an America nor can there be an America without African American.

Through the actions of this great man I got to admire, I, as Martin Luther King Jr would say under these circumstances to everybody today that if in math two minuses make a positive, two wrongs will never make a right in real life.

Because just like myself, many blacks have lived extraordinarily positive and deep experiences with white people, I strongly refuse the idea that all whites are the same.

As a matter of fact, the white people that I have been blessed to know during my twenty years stay in the US, take this case as an American case and are even more afflicted by this situation than some regular Joes because they feel like this is hindering or putting a breach in their relationships with the other community.

They are fully benefiting from each other’s experiences, ways of doing things, cooking, believing in GOD and so much more.

I want to conclude by saying that slavery is over and that black lives truly matter, let us all therefore acknowledge today that George Floyd is not the symbol of the end of something, but the wonderful and powerful sign of the beginning of a new era, in which all communities see themselves as equal before GOD and men, and in which the weaknesses of the ones should start being the strengths of the others and vice versa.

And there will soon be a serious sense of accountability across the board that will prevail among parties, making ones be the keepers of the others and vice versa.

It is only in that state of mind, that mutual change can melt differences and create an even stronger nation because a nation is not strong through its weapons but through the character of its people. America should remain one and undivided as planned by the forefathers.